skip to main | skip to sidebar
My experiences as a snake owner and as a snake enthusiast. With a healthy potpourri of other stuff... 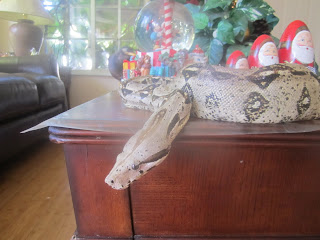 Barbossa's the spoke-reptile for this year's merriment! Of course, Loke the bird has to sneak into the picture, but it's all about Barbossa and his gorgeousness. Of course, he was a little scared (read terrified) of posing with those little Santa dolls. I'm sorry, darling, don't hate me. I promise you won't have to do it again...at least until next year.
Anyway, he and I and the entire reptile squad would lie to wish you all happy, happy holidays!!!
Posted by Unknown at 12:50 PM No comments: 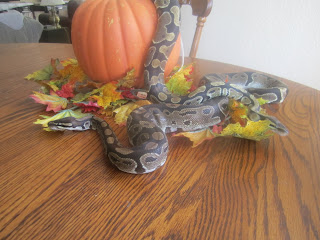 On this day, I give thanks for family, in all shapes, species, sizes, and scale patterns.
In particular, thank you to my beautiful 6 snakes, who make my life better every single day. Thank you, my darlings, for being your wonderful selves! 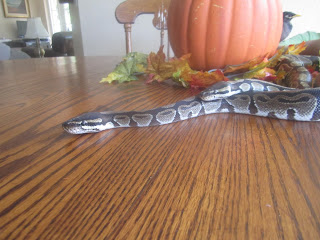 (Topkapi and Damascus, with a guest appearance by Loki, my bird, in the back)
Posted by Unknown at 12:22 PM No comments: 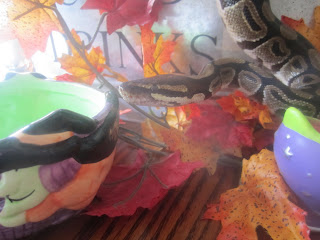 Ms. Topkapi would like to wish you all a fabulousssssss Halloween!
Posted by Unknown at 12:43 PM No comments:

Barbossa has just finished eating and is resting comfortably under his heat lamp. Of course, I did have to help him with one mouse. He killed it and then had no clue where it went. It was, of course, still in his coils, but there was no way Barbossa could figure that out. I had to actually stick my hands in and uncoil him, and then feed him.
He got a littel scared, but the yummy mouse made up for that.

Everyone else has been behaving remarkably well. It's mighty suspicious. I'll be keeping an eye out for any craziness,
Posted by Unknown at 3:03 PM 1 comment:

Adventures with a Boa

Barbossa had a bit of an adventure yesterday.
He somehow, for some reason, decided he'd been in his cage long enough. It was time for something new. I ascended the stairs with his mice, but he was not in his cage. Unusual, no, unheard of.
How did my shy baby get the courage to attempt a daring escape?

I scoured the room, knowing he couldn't leave because he couldn't get his coils past the door. I found him under the large, large bookcase. He'd gotten underneath and was curled up, happy in his new, if constrained hiding spot. I prodded him gently, but nothing. I would have to move the bookcase, but it's not an easy affair when it is as tall as the room, and packed with books.

So I calle dthe cavalry, my mom and dad. They'd recently bought one of those thingies (see the technical term?) to prod furniture up to place sliding pads underneath, so we used it to carefully lift the bookcase. I cannot describe the scene that ensued, my dad pushing the bookcase up, my mom sticking books underneath to keep it propped up, and I, with my hands under the bookcase, playing a game of catch-me-if-you-can with Barbossa. I grabbed him by the tail, but he was knotted up in his own coils, so I had to keep turning him, unwinding him like a scarf, until finally, with one more tug, he came free.
We were all sweaty and tired, but he looked none the worse for wear, if a bit sheepish. Yes, snakes can look sheepish.
So that was my Sunday afternoon. Interesting, no?
Posted by Unknown at 7:34 PM No comments:

Yes, I know I've been MIA for a few weeks, but I've just been swamped with getting ready for a recital with my teacher's studio. Tahnkfully, that happened Friday and it went well. 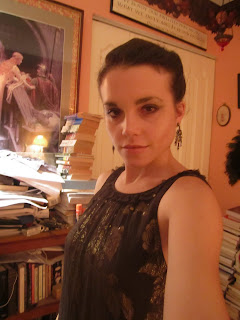 That's a picture of me right after the recital. Can you spot the relief and exhaustion?

In the interim, Coral managed to escape and get found all in the space of a week. She was strolling around the kitchen's window sill, ejoying her freedom. My mom found her.

I might, MIGHT get a carpet python baby. A bunch of reptiles were confiscated from someome one trying to smuggle them in and they were handed over to the Wildlife Center (the reptiles, not the people. Although how fun would that be? Locking criminals up with George the Bald Eagle)If no one claims then, legally, in the next 90 days, anyone is free to take them.
We'll see what happens.
Posted by Unknown at 12:23 PM 1 comment:

Coral ate again! Yes! I think she's not angry with me anymore because I keep her safe in a cage. She's spending more time in her hiding place, so obviously she's becoming a bit more used to captivity. Or she's planning something major, involving smoke bombs and lasers glass cutters. Who knows with her?

Damascus ate also, with his usual gusto, while Talulah and Tybalt ate on Wednesday, so they are curled up with full bellies.
Topkapi didn't eat last week, I don't know why, so I'm hoping tonight she'll take the mouse. She's a grown snake, so it's not a big deal for her to miss a week, but still it makes me worry.
Posted by Unknown at 6:07 PM No comments: